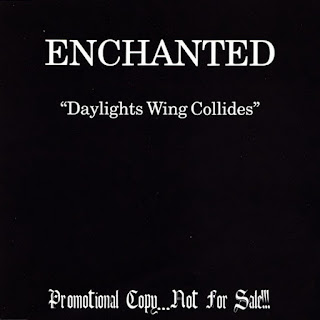 Enchanted was a melodic black metal band from Bergen, Norway that was formed in 1992.
The band was led by Iscariah aka Stian Smørholm (Dead To This World, Amok, Wurdulak etc.)
and released a rehearsal tape in 1994, followed by the demo "Breed My Sorrows" in 1995.
Their last work was the promo CD  "Daylights Wing Collides",
that was recorded at Grieghallen Studio and published by Edged Circle Productions in 250 copies.
This recording was actually supposed to be officially released as a 7" or 10" vinyl
with full color artwork but Edged Circle Productions went bankrupt before this could be finalized.
The band had actually a lot of material for a planned debut album but this was never happened.
Enchanted split up around 1999 because of lack of time since Iscariah had joined Immortal at the time.