Jesper Kyd – The Adventures Of Batman And Robin (1995) 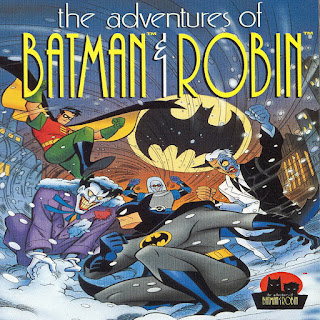 The Adventures Of Batman & Robin is a series of video game adaptations released between 1994 and 1995
featuring the DC Comics characters Batman and Robin based on Batman: The Animated Series.
The games were released for numerous platforms, with the Genesis, Game Gear and Sega CD versions published by Sega while the Super NES version was published by Konami.
The Genesis version (released on August 2, 1995), developed by Clockwork Tortoise,
is a run 'n' gun game where both Batman and Robin must stop Mr. Freeze.
In order to keep the duo busy, he also frees the Joker, Two-Face and the Mad Hatter.
The game can be played by two players simultaneously and there are four levels consisting of several stages,
mostly of a straight left-to-right traverse to the end where the boss awaits.
In some levels the game switches to a side-scrolling shooter, in which the players must control the Batwings.
The game features a soundtrack composed by Jesper Kyd.
Jesper Kyd Jakobson (born 3 February 1972) is a Danish composer and sound designer,
who has worked on various video game, television, and film projects.
His scores use orchestra, choir, acoustic manipulations and electronic soundscapes.
Kyd started playing the piano at an early age and later, he took several years of training in classical guitar,
note reading, choir singing and classical composition for piano but he is mostly self-taught.
He started using computers for composing on a Commodore 64 at age 14 and later an Amiga.
Kyd and Mikael Balle became members of the demogroup Silents DK and collaborated with the coders group Crionics.
They eventually made the Amiga demoscene production Hardwired.
He also created and scored the first demo, Global Trash 2, together with Mikael Balle.
Kyd then left the demoscene and started to work as a game musician.
He and others created the computer game developer Zyrinx and a game called Sub-Terrania for the Sega Genesis.
Kyd composed music for two additional Zyrinx titles, Red Zone and Scorcher
and the music for two externally developed games, Amok and The Adventures Of Batman And Robin for the Sega Genesis.
Zyrinx dissolved when their game publisher Scavenger went bankrupt.
Many former Zyrinx members returned to Denmark to start IO Interactive,
but Kyd moved to New York City and set up his own sound studio in Manhattan called "Nano Studios".
He then worked as a freelance video game musician.
He worked on BioWare's MDK2, Shiny's Messiah and IO's Hitman: Codename 47.
The soundtrack to Codename 47 was based on urban soundscapes and ethnic instrumentation.
He then recorded the soundtrack of Hitman 2: Silent Assassin
with 110 musicians of the Budapest Symphony Orchestra and Hungarian Radio Choir.
He recorded the score for the action/adventure Freedom Fighters with the Hungarian Radio Choir
that was described by Film Score Monthly Magazine as "Vangelis on steroids"
He used modern electronica and symphonic and choral music in Hitman: Contracts
while the Budapest Symphony Orchestra and Hungarian Radio Choir were used once more in Hitman: Blood Money.
Jesper then provided scores for the games like Assassin's Creed, Assassin's Creed II, Assassin's Creed: Brotherhood,
Assassin's Creed: Revelations (co-composed with Lorne Balfe), Borderlands, Borderlands 2, State Of Decay, Darksiders II, Borderlands: The Pre-Sequel, Warhammer: End Times - Vermintide, State Of Decay 2, Warhammer: Vermintide 2
and Borderlands 3 (with Michael McCann, Finishing Move Inc. and Raison Varner).
In 2015, he scored the Chinese fantasy film Chronicles Of The Ghostly Tribe followed by the Indian fantasy film Tumbbad.
The music for the upcoming game Assassin's Creed Valhalla was also composed by Jesper Kyd and Sarah Schachner,
both whom have worked on past Assassin's Creed games.
Einar Selvik (aka Kvitrafn), who had written original songs for the History Channel show Vikings,
will also work with Kyd and Schachner for new songs for Valhalla.
Jesper Kyd's influences include composers such as Ottorino Respighi, Igor Stravinsky, Jean-Michel Jarre, Vangelis,
Mike Oldfield, John Williams, Jerry Goldsmith and bands such as Röyksopp, The Knife, Pink Floyd, and Underworld.