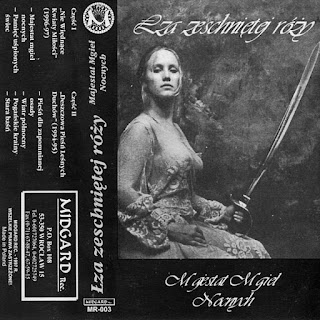 Łza Zeschniętej Róży (Tear Of A Withered Rose) was a melodic pagan/black metal band that formed at the end of 1993.
Initially the band was named Bathuel and two demo tapes were recorded under this moniker.
The first one, entitled "The Legends Of Pagans", was recorded live, without mix,
during one night in Pruszcz Gdanski studio in February 1995 and consisted of three songs..
The line up at the time was Adam Wosiak (vocals, rhythm guitar), Krzysztof Twardosz (drums & percussion),
Robert Bandzul (solo guitar) and session musician Sebastian Smolak (Keyboards).
The second demo, "Deszczowa Pieśń Leśnych Duchów" (Rainy Song Of Forest Spirits), was recorded in Swarzędz studio
in May 1996, by Adam Wosiak (vocals, rhythm guitar, bass guitar)
and Krzysztof Twardosz (drums & percussion, solo guitar, keyboard, vocals).
The group had a contract offer with the German label Solistitium Records but the deal never completed.
After recording their second demo, the band changed  their name to Łza Zeschniętej Róży and in May 1997,
they recorded their first full length entitled "Majestat Mgieł Nocnych" (The Majesty Of Night Mists),
at Selani Studio in Olsztyn that was released on tape by Midgard Records.
New band member, Aleksandra Mazurek, participated in the recordings as a keyboardist and also adding some vocals.
Robert Bandzul, known from the first demo tape, was also involved in arrangement of some of the songs.
It is worth mentioning, that the band had nearly 40 hours for recording,
which was unbelievably short and therefore some shortcomings could not be avoided.
Only three hours were used on vocals recordings and the same time was spent on mixing,
while there were only four drum rehearsals.
Krzysztof Twardosz played an important role in the studio, as he recorded most of the instruments,
helped with arrangement and put finishing touches to tracks.
Adam Wosiak was the author of all compositions, except "Wiatr Północny" and made the most of the drum arrangements.